Hi there, I am Andrea, hope you liked my post. I just wanted to share my experience about how to become location independent.

In school, we spent an insane amount of hours learning English grammar. As my mother tongue is Hungarian, I had to get used to the specific rules of English language: twelve tenses, types of conditionals, irregular verbs, and so on. When you are learning English in a proper way, you have to switch your brain to think in English as well.

In school, we also got bad marks and some extra homework for committing the most annoying grammar mistakes. ‘More better’ is not the way to say it, ‘ananas’ is not an English word, neither is ‘unconvenient’.

Many people love to write and share useful information and thoughts with their audience. However, no matter if someone is about to reveal the meaning of life, if they do so with a lot of grammatical errors in their writing, that can completely ruin everything. Learning English grammar is crucial.

There are certain embarrassing grammar mistakes that everyone should avoid under any circumstances. What are these?

Here are the most common troublesome words that you should always double-check in your essay:

Whether people are just lazy, or they forget to use that apostrophe, these words mean two totally different things. ‘Its’ is the possessive form of a third person pronoun, while ‘it’s’ is the contraction of ‘it is’. This is a common and very annoying mistake, as ‘s usually marks possession, and with ‘its’ we indeed try to express something that is owned by the subject, but in this case, the solution is a separate possessive pronoun.

Example #2: The Forint has lost its value.

Again, ‘you’re’ is the contraction of ‘you are’ and ‘they’re’ is the contraction of ‘they are’. ‘Your’ and ‘there’ are possessive pronouns, expressing that the object is possessed by ‘you’ or ‘they’. If you have any doubts when writing, just try to replace them with ‘you are’ or ‘they are’. Then, if the sentence doesn’t mean anything, you probably wanted to use the other word.

‘Than’ is a conjunction for comparisons. For example: ‘I am smarter than you’. On the other hand, the word ‘then’ is an adverb that is used to express time. For example: ‘I got dressed, then went out.’ The than vs. then grammar mistake is very common among native speakers as well.

Example #1: Who is the winner?

Example #2: Whom did the winner beat? 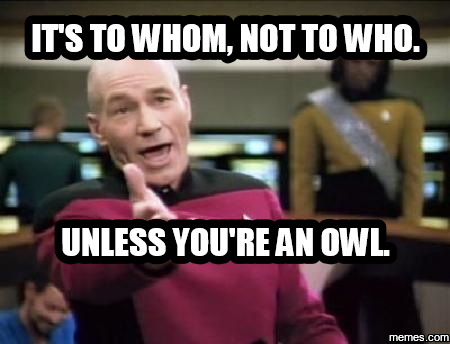 These two are easy to mix up since they sound alike. Although ‘s usually signifies ownership, in the case of ‘who’s’, it stands for ‘is’.

Example#1: Who’s responsible for this error?

You should use the word ‘whose’, if you’d like to inquire about the owner of an object.

Example #2: Whose error is that?

These two are also commonly messed up. The main difference between them is that ‘affect’ is a verb, while ‘effect’ is a noun. You can affect something, and consequently, you’ll get an effect. Just to make things even trickier, ‘to affect’ and ‘to have an effect on something’ mean the same.

Example #1: Smoking affects your health in a negative way!

Example #2: Giving up smoking has a positive effect on your health!

8. Adverbs at the end of the sentence

Putting an adjective at the end of the sentence as a modifier is incorrect. If you hear “ I’m going to finish quick”, there’s no wonder why you feel uncomfortable. At the end of a sentence, you put an adverb normally ending with -ly, which modifies the verb, the adjective, another adverb, or the whole sentence.

A T-shirt can be loose, or your pair of baggy jeans. It’s an adjective, the opposite of ‘tight’. While ‘lose’ means that an object is no longer in your possession. Both the simple past and the past participle tenses of ‘lose’ is ‘lost’. Just remember this: ‘Losing a loose button’.

A real struggle: these words have three totally different meanings!

You should use ‘lay’ when you’re acting upon something. ‘Lay’ always has an object. E.g.: ‘chickens lay eggs.’

Both the simple past and past participle tenses of ‘lay’ is ‘laid’. E.g. The government laid down the rules.

When you’re going to bed to have a nap, you want to use the expression ‘lie down’. ‘Lie’ does not have an object. E.g.: She was lying.

Things can get confusing when someone wants to use the past tense of lie, which is ‘lay’. In a conversation, the context will always help you when you are not sure about the meaning. The past participle tense of lie is ‘lain’, that’s an easy one.

Not telling the truth is a lie. Example: ‘Do not lie to me!’

Both the past simple and the past participle tenses of ‘lie’, is ‘lied’. The continuous form of lie is lying, just as at the previous word: You are lying on the bed, and lying to your parents as well.

When you get confused, visit this site to revise the past tenses again, it’s super useful.

It was refreshing and, of course, useful to collect all these annoying grammar mistakes that everyone should avoid under any circumstances. Whenever you feel uncomfortable using these words in your writing, always double check, or use a grammar checker.

Learning English and owning English grammar is not easy, as you are not only ‘speak’ the language, but you have to take up the correct intonation, mindset, way of thinking and elements of culture. And we haven’t even yet talked about everyday language and slang. The most important thing is to practice as much as you can!

I personally always use  Grammarly, which corrects not only the grammar, but the style, sentence structures, and punctuation as well. It is also a great tool for vocabulary enhancement, plagiarism checker, that correct all your mistakes, so you’ll learn English on the go as well. Or, another option is to leave the writing to DandyContent, and I’ll make sure that your article is flawless 🙂

About the Author Andrea Papp

How can you improve your English grammar?

How to get an online job? – Freelancing for newbies

Please log in again. The login page will open in a new window. After logging in you can close it and return to this page.